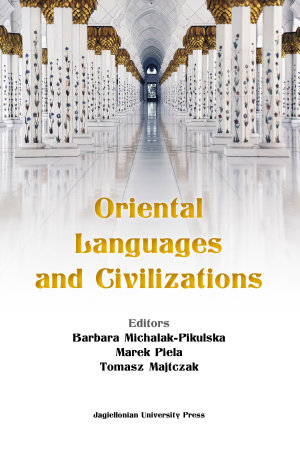 The volume consists of six parts devoted to literature, languages, history, culture, science, religions and philosophy of the Eastern World. Its aim is to portray the present-day state of oriental studies, which are here understood predominantly as philologies of Asia and Africa, but also as a field of study including other, adjacent disciplines of the humanities, not neglecting the history of oriental research. The book’s multidisciplinary content reflects the multi- and often interdisciplinary nature of oriental studies today. Part 1 (Literature) offers new insights into belles-lettres written in Arabic, Hindi, Turkish, Urdu, Persian and Japanese. Part 2 (Linguistics) contains studies on Sanskrit texts (in a stylometric approach), Japanese nominals, Japanese poetry as a linguistic source, Arabic translations of the Bible, Arabic dialect of Morocco, Arabic culinary terms of Persian origin and Turkish vocabulary of the language reform era. Part 3 (History) investigates Napoleon’s campaign in the Middle East, Middle Eastern-Russian relations in the 18th century, the history of Seljuk Empire and the works of a Moroccan historian, Ǧaʿfar Ibn Aḥmad an-Nāṣīrī as-Salawī. Part 4 (Historyof Oriental Studies) deals with the history of oriental studies in Kraków and with the problems of a critical edition of the Quran. Part 5 (Culture and Science) examines the artistic achievements of Egyptian moviemaker Yūsuf Šahīn and possible influence of the Muslim science on medieval Polish scholars. Part 6 (Religion and Philosophy) explores some philosophical concepts of the Confucian ethics and the contribution of Karīma Bint Aḥmad Al-Marwaziyya to preservation and transmission of some religious traditions of Islam. 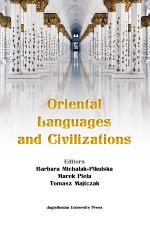 Authors: Barbara Michalak-Pikulska, Marek Piela, Tomasz Majtczak
Categories: Foreign Language Study
The volume consists of six parts devoted to literature, languages, history, culture, science, religions and philosophy of the Eastern World. Its aim is to portray the present-day state of oriental studies, which are here understood predominantly as philologies of Asia and Africa, but also as a field of study including 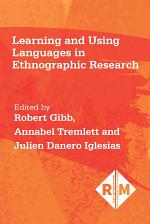 Authors: Robert Gibb, Annabel Tremlett, Julien Danero Iglesias
Categories: Reference
Learning and Using Languages in Ethnographic Research breaks the silence that still surrounds learning a language for ethnographic research and in the process demystifies some of the multilingual aspects of contemporary ethnographic work. It does this by offering a set of engaging and accessible accounts of language learning and use 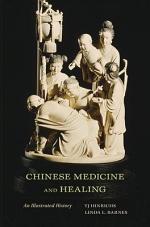 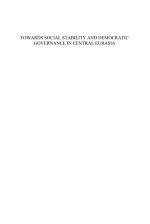 Towards Social Stability and Democratic Governance in Central Eurasia

Authors: I. Morozova, Irina Yurievna Morozova
Categories: Business & Economics
Through invasions, migrations, trade and cultural exchange, developments in Central Eurasia have, for millennia, impacted upon the history of both Europe and Asia. For the last three hundred years, Central Eurasia has been the stage upon which great empires clashed. Following the dissolution of the Soviet Union, Central Eurasia has 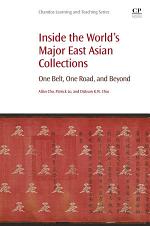 Authors: Patrick Lo, Dickson KW Chiu, Allan Cho
Categories: Language Arts & Disciplines
Inside the World’s Major East Asian Collections examines the rise of the “LAM,” an acronym that stands for libraries, archives and museums. In doing so, this book profiles leading experts—librarians, archivists and museum curators—who specialise in East Asian collections from across the world. In examining the dynamically shifting role of